A Twitter friend of mine shared this Buzz Feed article yesterday: 19 Things Women Writers Are Sick of Hearing. For those of you who don’t want to click the link, it’s a series of photographs taken at the AWP Conference. Photos of women writers holding whiteboards of things women writers hear all too often. I shared this link on my personal Facebook page when it came out, back in March, and it occasioned an interesting conversation between me and a (white, male) friend of mine, who is a professor of writing (among other things) at a United States University.

DISCLAIMER: I searched all through my Facebook Timeline to try to find this actual conversation so I could quote directly from it, but since it took place so long ago (by Facebook standards), I couldn’t locate it. So this blog post is based on my recollections of the conversation, rather than on me looking at the actual words. I stand by my recollections, because the conversation I had with my (white, male) professor friend is one that I’ve seen other women refer to, but one I’ve never taken part in. And it threw me, because my professor friend is another Good Guy, thoughtful and insightful. But he still didn’t see some of the things I saw. If I ever do manage to find the thread, I will, of course, amend this post as necessary to provide direct quotations.

The conversation revolved around this image, which appeared fourth in the list. 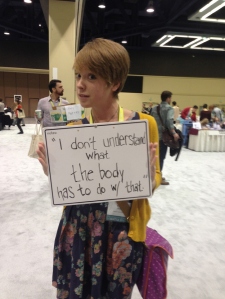 This is what my friend had to say. Again, it’s paraphrased because I can’t find the related thread from which to post:

I can see how many of these questions would be annoying. But the fourth one bothers me. If she’s consistently getting that kind of feedback, she needs to look at her own writing instead of complaining about the criticism. It’s more productive to work on the writing craft than to bitch about people not understanding you.

The response rather jerked my chain. Here are a number of women stating things they hear over and over again, things they find useless and annoying. And instead of believing that this particular woman had a right to be annoyed and was expressing frustration at the patronizing attitude many women writers get from readers–especially male readers–who have not made an effort to understand their work because the writers are female, my friend immediately leaped to the conclusion that there must be something lacking in her work. Now, I have no idea who this writer is. The subjects of the photographs were not named. I don’t know her, don’t know her work, don’t know the context of the comment. But neither does my male friend. He had no basis for his comment that this writer needs to work on her craft. He just felt that, as a (white, male) writing professor, he was privileged to make it. Without even acknowledging that he had no context for his remarks.

We went back and forth for a long time. Because my friend is a Good Guy, whom I’ve known since high school, I tried to explain the experience of the woman writer.  How we face this kind of thing at every public appearance, with every public statement. How male readers and male writers–especially in genre fiction–judge us at the drop of a hat. Accuse us of “ruining the genre.“ Declare that we don’t know what we’re talking about, or that our experience and professionalism should be questioned because what we wore on vacation was “too revealing.”

My friend responded with several posts about how, as a professor of writing, he stresses to his students the need to be open to criticism rather than respond with knee-jerk defensiveness. In fact, he said, even in his own experience he has had things pointed out to him that he did not want to face (namely, accusations of unconscious racism in some of his published articles), but he forced himself to re-examine his writing and try to see the other person’s point of view.

Do you see the trap I fell into here? It took me several exchanges to see it for myself. Because my friend is a Good Guy, I tried to tell him about what life is like for women writers, believing he would listen to me because he knows me as a person. Which is not necessarily a bad thing to do. But for a long time, I failed to address the main problem with his original statement. I got derailed with explanations and justifications, with defending the picture instead of calling my friend on the thing that had upset me in the first place. It took me several exchanges over the course of the day before I realized we were speaking at cross purposes. He thought we were talking about effective writing. And I thought we were talking about women’s experience.

When I finally got it, I posted this comment:

Look, I love you. But your male professorial privilege is showing. Because you have made an assumption about the quality of this woman’s writing from nothing more than a picture of her holding a sign with a statement of something she finds annoying.

I didn’t make any assumptions. Why are you accusing me of making assumptions?

So, I spelled it out for him. I quoted back his original comment: “She needs to look at her own writing instead of complaining about the criticism.” I pointed out that he had no basis to make this statement, as he had never read the author and could have no idea whether or not the criticism was justified. I told him that, to me, it looked very much as if he had read her “complaint” and automatically decided that she had not sufficiently explained “what the body had to do with it,” WITHOUT having any clue of the context or whether she did or not. To me, this is strong evidence that he had made an assumption about the quality of her work without ever having read it. Because she publicly declared she was fed up, and because he’s a (white, male) professor of writing who knows these things.

Well, he came back with, “You’ve supported your position very well and given me a lot to think about,” which I found a bit condescending, but accepted as the best response I was likely to get. After all, he’d made a tacit agreement to think about things, which was about all I could hope for and better than I get from a lot of people. And that was essentially the end of the conversation.

The lesson here? I think there are a couple.  The first is, posts like that one on Buzz Feed may be validating for those who already “get it,” and as such are valuable. But they don’t convince people who don’t already “get it.” They don’t even necessarily engender coherent questions and conversations, because those who don’t “get it” can’t even see what the problem is. And the second is, when people can’t see what the problem is, it does no good to engage in long conversations trying to explain it. As long as the eyes are closed, they’re STILL not going to see. You have to go to the blind spot. You have to point out the unconscious assumptions that lie behind the automatic judgment. Like, “A woman holding a sign is wrong.” Like, “All feedback has value.” Like, “A white, male professor necessarily knows what he’s talking about.”